Todmorden is a picturesque market town. Nestled in the Upper Calder Valley in Calderdale. It has a small population of around 15 thousand people, yet boasts stunning views of the Pennine valleys and moorland.

Various bronze age items have been discovered in the area. Most notably around the Blackheath Barrow, a ring cairn monument. The Barrow site was an ancient burial place, holding tomb urns, a human skull, teeth and other assorted bones. The finds from the excavation of this site are held in Todmorden library.

The earliest written record of a settlement in the area is in the Domesday Book. settlement in the area at the time was sparse. Most people lived in scattered farms or on hilltop agricultural settlements. Many of the marker stones for pack horse trails still survive to this day. For hundreds of years the crystal clear streams provided abundant water for corn and other grain mills. Todmorden grew to prosperity combining its farming with lucrative textile production.

In the start of the 19th century most people still lived in the peaks of the valley. During the years between 1800 and 1845 changes took place that increased the logistical efficiency of the area. The Rochdale Canal was constructed in 1804 increasing the freight capacity of the area modernizing it and allowing for better trade links in larger volumes than possible on land. Later in 1841 the main line of the Manchester to Leeds railway was constructed. This railway cut through the valleys and included the longest tunnel in the world, at the time. With more railway construction Todmorden became a thoroughfare for locomotive traffic widening the logistical links for both people and goods. The Industrial Revolution caused even more of a change for the area, concentrating industry and settlement along the valley floor and switching from woollen production to cotton.

Todmorden’s economy and industry experienced a slow decline from around the end of the first world war. This decline accelerated after the second world war until around the late 1970’s. During this period the entire local economy was restructured, to the detriment of the local populace. This restructuring featured the closure of mills and the demise of the heavy industry in the area. Until 1938, Todmorden was served by around six railway stations. All but the Todmorden railway station closed during the middle of the 20th century.

In 1980 Todmorden found itself in a peculiar position. With a murder enquiry on the 11th of June. Police were called to the coal yard in Todmorden after the discovery of a body. This man from Wakefield, a former coal miner, had not been seen since setting off on a shopping trip five days earlier. A post mortem established he had died of a heart attack. However, he had been discovered to have acquired burns across his neck, shoulders and back of his head. These appeared to have been dressed by a green ointment, of which toxicology reports couldn’t identify. This led to the speculation that the man was a victim of alien abduction. Due to this bizarre circumstance the case still lays unsolved today.

In 2008 a group of residents created the Incredible Edible Todmorden Project. This project was to raise awareness of food issues and provide a source of local food and food support to the local community. The project was responsible for the planting of 40 public fruit and veg gardens throughout the town. The public are welcomed to harvest any of the produce. This project gained great notoriety and media attention. 15 other towns and villages replicated this idea.

The imposing Todmorden Town Hall is designed in the neoclassical style and dominates the centre of the town. The northern end of the townhall is semi-circular, with fine carved stonework and depictions of two female figures on a pedestal. The left hand sculpture represents Lancashire and the right hand one Yorkshire, both showcasing their respective industry bases. Todmorden itself gives the atmosphere of an old Victorian mill town. With a castle and an Edwardian hippodrome theatre and a grade one listed Unitarian Church. The famous Pennine trail cuts through Todmorden. The town is popular for outdoor activities. For instance, some common activities include; fell running, mountain biking and bouldering.

Nearby the Todmorden War Memorial in the garden of remembrance is a sculpture of a dog. This sculpture featured in one of Derren Brown’s episodes of ‘The Experiments’. Derren spread the rumour that the dog was lucky. As such it gained the reputation for granting wishes and luck to anyone that touched it. 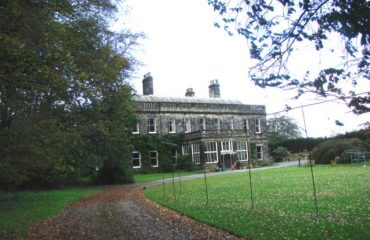 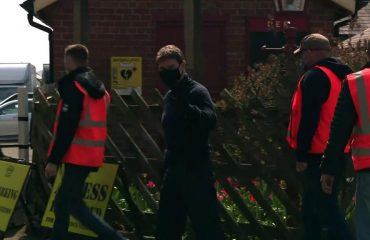